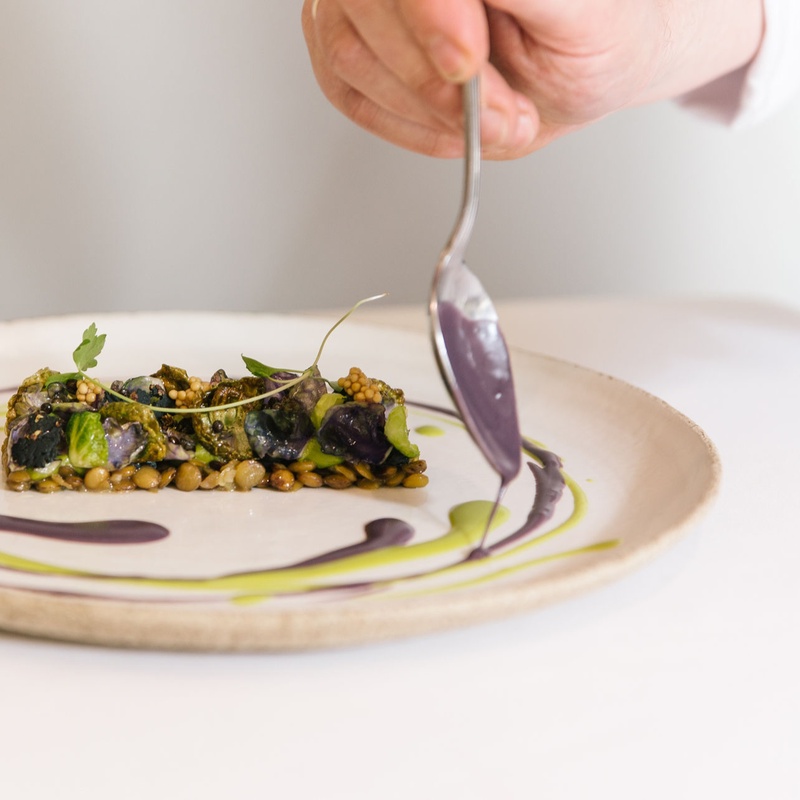 TIAN has truly lifted fine dining to a whole new level thanks to its visionary chef Paul Ivić, and founder Christian Halper.  Respecting natural cycles, TIAN pays attention to preferably organic products, created in a fair way. The seasonal ingredients are predominantly supplied by regional partners, that understand and adhere to their high standards of quality concerning fresh food. The name TIAN is not a coincidence by the way. It is the Chinese word for “heaven”, as well as a French vegetarian stew.  With TIAN they have both fulfilled a longstanding dream: vegetarian food prepared in a way that will have your taste buds tingling while indulging all your senses. The experience was one of our fullest and most special so far: incredible flavours, exceptional staff, phenomenal juice pairing. Otherwise it's hard to describe the feeling, you must try it. Let food enriches our lives! Read on to get inspired, and then go and visit TIAN. 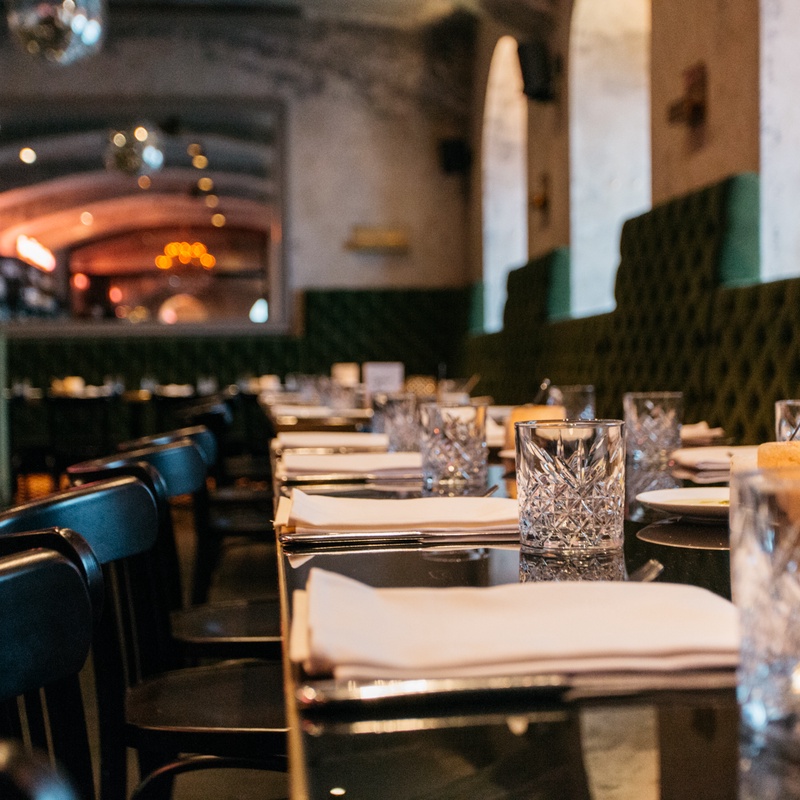 MOTTO Restaurant & Bar, located on Schönbrunner Straße, in the fifth district of Vienna, was apparently one of the first gay clubs in the 70’s and has since become somewhat one of the most popular celebrity hotspots in the city. Once you make it inside through the large chrome door (on Rüdigergasse, it’s tricky), the bar will be on your left, while the sophisticated dining area on your right, both opening at 6pm. You should definitely go both directions; you may decide the order though! Once we found its lush green interior via Instagram, we could not get it out of our heads. It was clear that the place has since become the ultimate hangout place amongst the trendy crowds of Vienna, so we joined them. It was Thursday 7pm and the restaurant was fully packed, few hours later as was the bar. Apart from its impressive interior, MOTTO is also known for its kitchen, which stays open after midnight. The menu features delicious dishes like beef carpaccio, salmon tatar or mountain trout, while the cocktail choices are not any less notable. Booking your tables already? 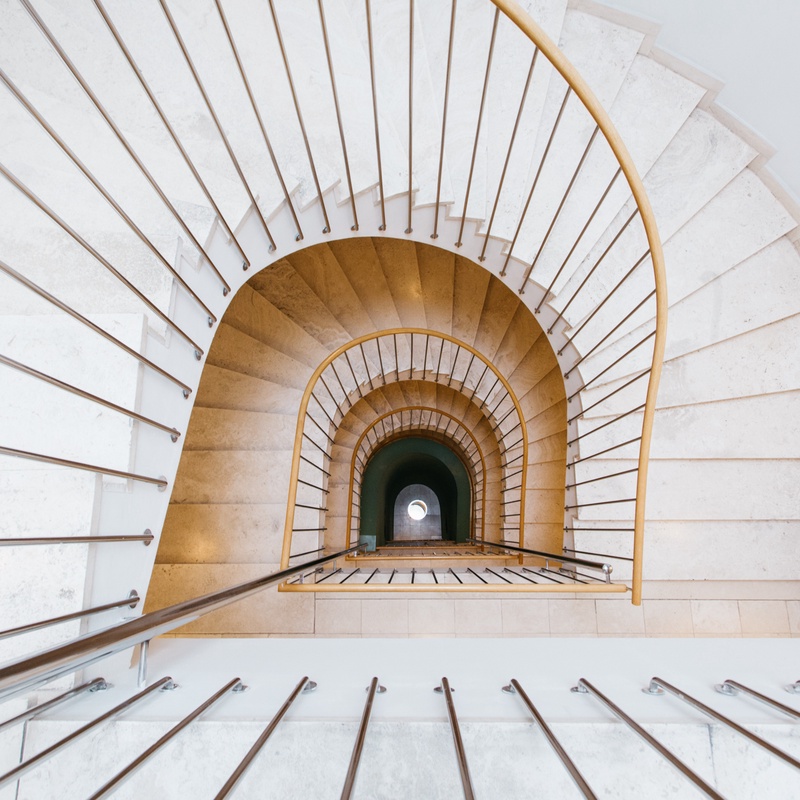 Sleeping in a coach station can only bring mixed feelings we suppose; or even call them negative ones. But there is an exception, trust us; a former coach station turned into a luxurious design hotel called, Das Triest in one of our very favourite cities, Vienna. It got its name quite rightfully; it goes back to the days of Archduchess Maria Theresia, when the mail coach service between Vienna and Triest used to stop there to change horses. The former stables with their vaulted ceilings have been turned into spacious lounges, suites and seminar rooms with a very special flair. The hotel's name choice pays homage to the era of the Austro-Hungarian Empire in the 18th and 19th centuries, and the beautiful town in Italy. Created by the famed British designer, Sir Terence Conran + Conran & Partners, the hotel is an outstanding example of how to successfully incorporate modern elegance in a traditional building. A few steps from Karlsplatz, it was the first design hotel opened in 1995 in the Austrian capital featuring 72 rooms including 16 suites. We're lucky enough to enjoy the hotel's warm hospitality and timeless elegance the other week. The two garden suites provided us the perfect nest throughout the hectic days at Forward Festival in Vienna. Curious about our impressions? 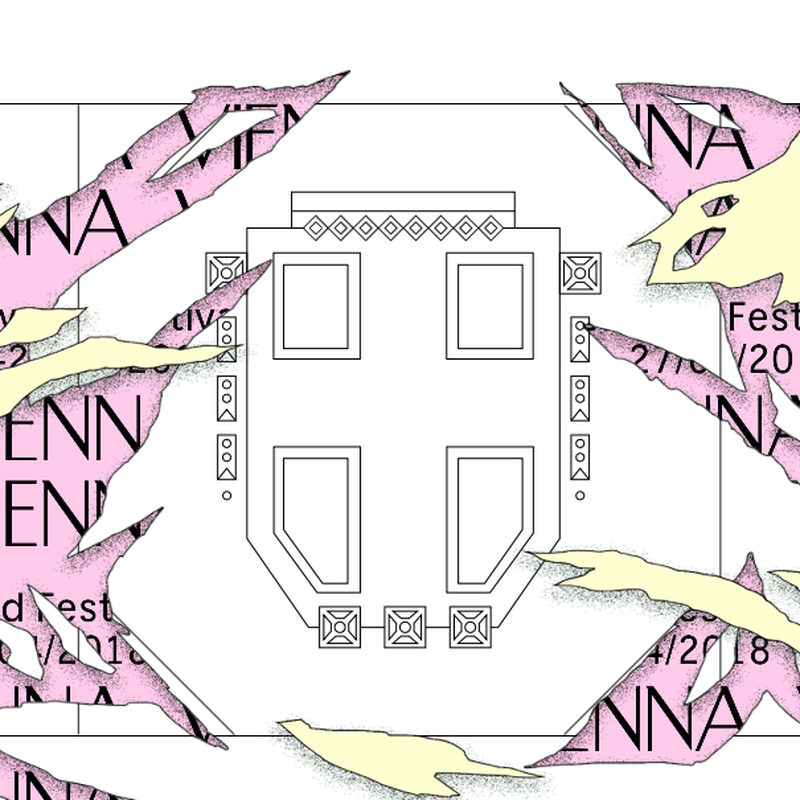 Our story with Forward Festival started a couple of months ago, whereas we stumbled upon Vienna's upcoming events. (As you may have noticed we have this thing going on with the city and in no time it became one of our number one destinations.) That's when we came across Forward Festival's website. The striking graphic design caught our immediate attention and we started to feel a sort of instant curiosity, like you'd wanted to be a part of something great. Their line-up already inlcluded names like Snøhetta, Space 10 or Ferry Gouw. So we got in touch with the guys behind Forward Creatives; Alex and Lukas, whom we happened to find quite a few crosspoints which resulted that Local's Lore is among this season's key not speakers in Vienna, Munich and Zürich. Forward brings together the best international and local creative heads, who provide insight into their success stories in an exciting atmosphere. The conference, the centerpiece of the festival, is accompanied by various side events, such as workshops, live art sessions and networking events. The idea behind Forward is to create a festival where the creative community can exchange opinions, inspire and learn from each other. Read the story behind their way to Forward Festival, it's inspirational! 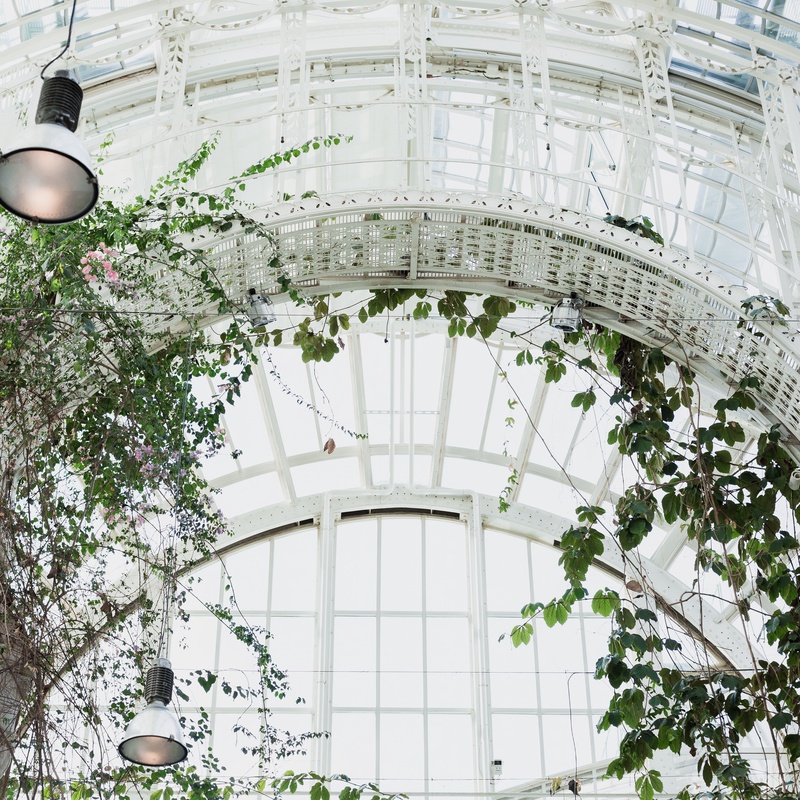 Although Vienna is not one of those tropical cities the 2050 sqm. building of a kind is housing a breathtaking greenery, a butterfly house and not least one of Vienna's most popular restaurant is a must-visit spot in the city no matter in which season you are visiting. The restaurant which successfully combines the sophistication of a café-slash-bar and the relaxed atmosphere of a brasserie, the Palmenhaus attracts an ever-growing number of guests all year around. When the weather is fine, visitors can now sit on the Palmenhaus´ outside terrace overlooking the beautiful Burggarten gardens and enjoy the finest culinary delights from breakfast through lunch to dinner. But the 15-metre high conservatory-style restaurant with its numerous exotic plants also provides a cosy retreat in winter: the cocktail bar with its comfortable leather sofas is the perfect place for an intimate tête-à-tête. From mid-November the Christmas menu tempts with innovative specialities so it really does worth a try even in the Winter. This time we opted for breakfast in Viennese style; fresh croissant with homemade butter and jam but the menu features bio-eggs with every kind of garnish from salmon to goat cheese. 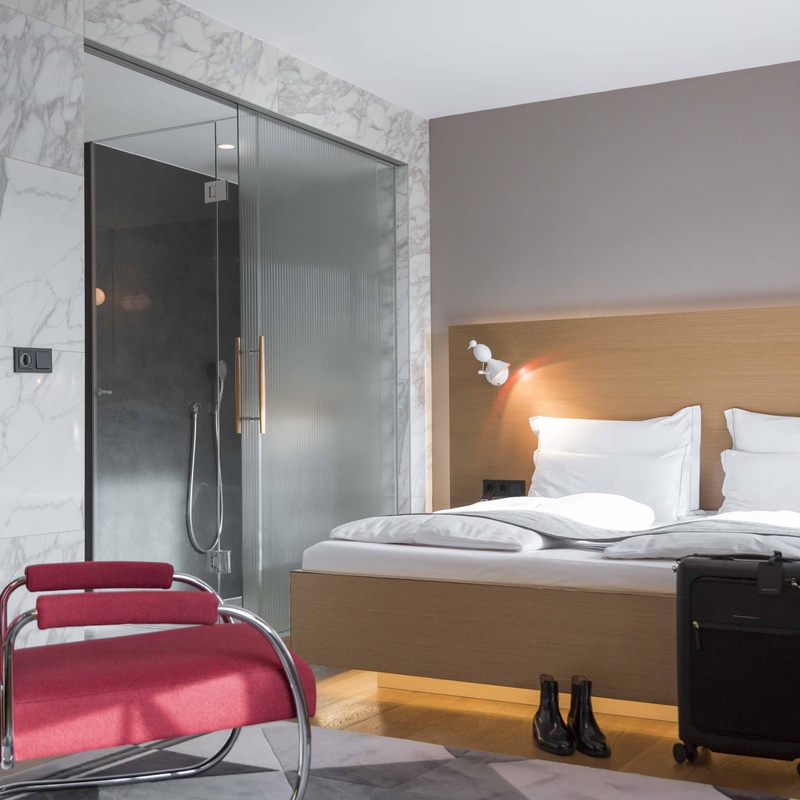 Christmas Giveaway: A night at The Guesthouse Vienna

As the best time of the year - CHRISTMAS is approaching, we have a big surprise for you! We have teamed up the The Guesthouse Vienna to give away a one-night-stay for two. By entering our GIVEAWAY one of you'll have the chance to win an overnight in a deluxe room with view towards the Opera and the Albertina Museum. Equipped with a huge lounge window, cosy living room area, bathtub and rainforest shower, you will be experiencing one of your best hotel adventures ever. To participate and be the happy winner do as follows: 1. Follow Local's Lore and The Guesthouse Vienna on Instagram and Facebook. 2. Tell us with whom you would stay at the hotel in the comment section and tag #localslore on your cosiest Christmas mood picture on Instagram. 3. The winner will be asked to share a story of her/his journey in Vienna as using our Vienna guide. The giveaway starts on the 4th of December 2pm CET and ends on the 25th of December 2pm CET. The winners will be announced on the 25th of December 4pm CET here on the site, in The Guesthouse Vienna lore. We wish you the best of luck and happy holidays! Our winner is @linneajv! Congratulations and Merry Christmas! 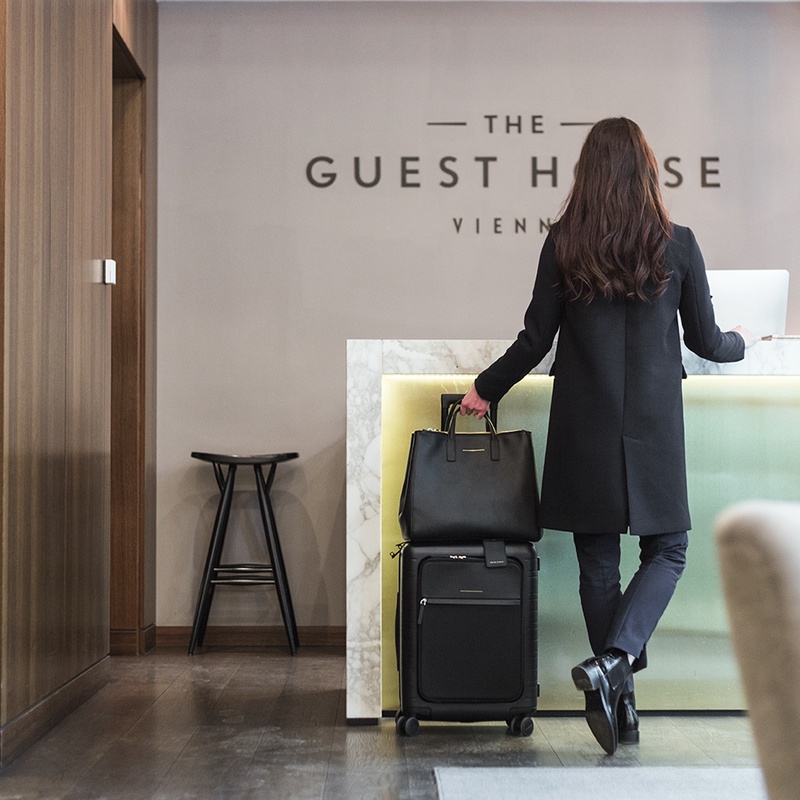 To get into the festive mood we have spoiled ourselves with a special getaway weekend in Vienna. Being truly one of our favourite cities and having the chance to explore it many times already, we decided to stay at The Guesthouse Vienna right next to the Opera and Albertina Museum. Being famous for its stylish rooms and amazing brunches, we had one of our greatest hotel-experiences. HOME. HONESTY. HERITAGE “Be a guest in your own house” – this is the philosophy of The Guesthouse Vienna. This hotel concept enables people visiting Vienna to feel as if they were in their own home – giving them the chance to experience the proverbial “Gemütlichkeit” or “chillaxed” atmosphere of the Austrian capital. This is exactly the mood we felt, when sitting in the reading corner and staring out to the city filled with Chrismas lights, while sipping hot tea. Want to get in the mood too? Read on! Want to experience the mood? Enter our giveaway! 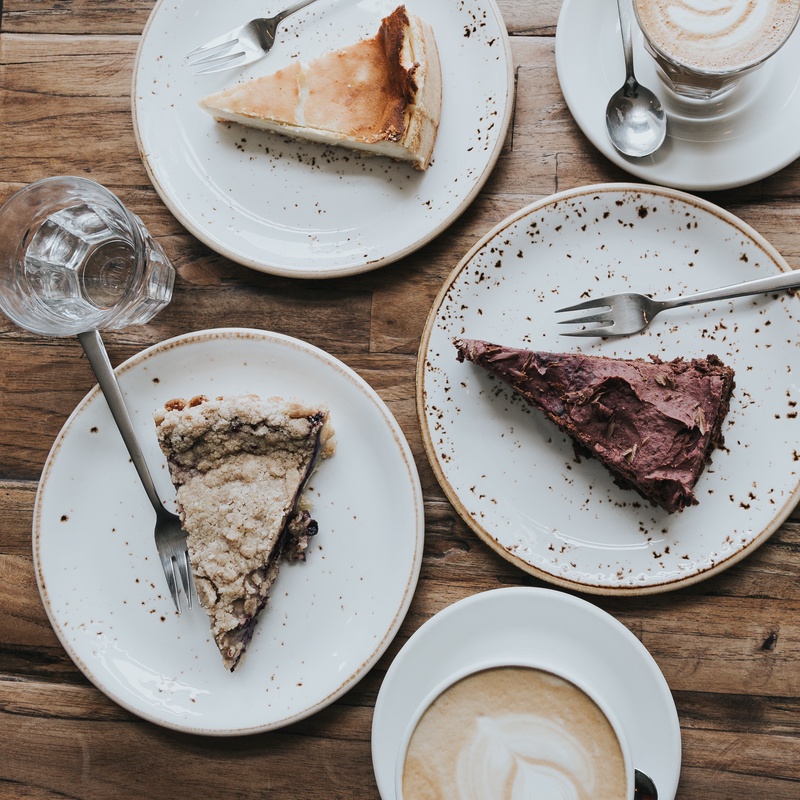 Opinions diverge on where to find the best coffee in Vienna – it’s currently a hotly debated topic and also a rather personal choice. For us, all ways lead to Jonas Reindl, the speciality coffeeshop right across the public transport hub, Schottentor. When we saw the statement "we filter coffee not people” at the entrance, we were sure we had come to the right place. This café attracts all types of people from across the city: coffee–addicts, locals, tourists and cake-lovers. Other than tasting the city’s best caffeinated liquid we came for the owner, Philip Feyer. We’ve been curious to hear his lore for a long time, luckily he did not resist. 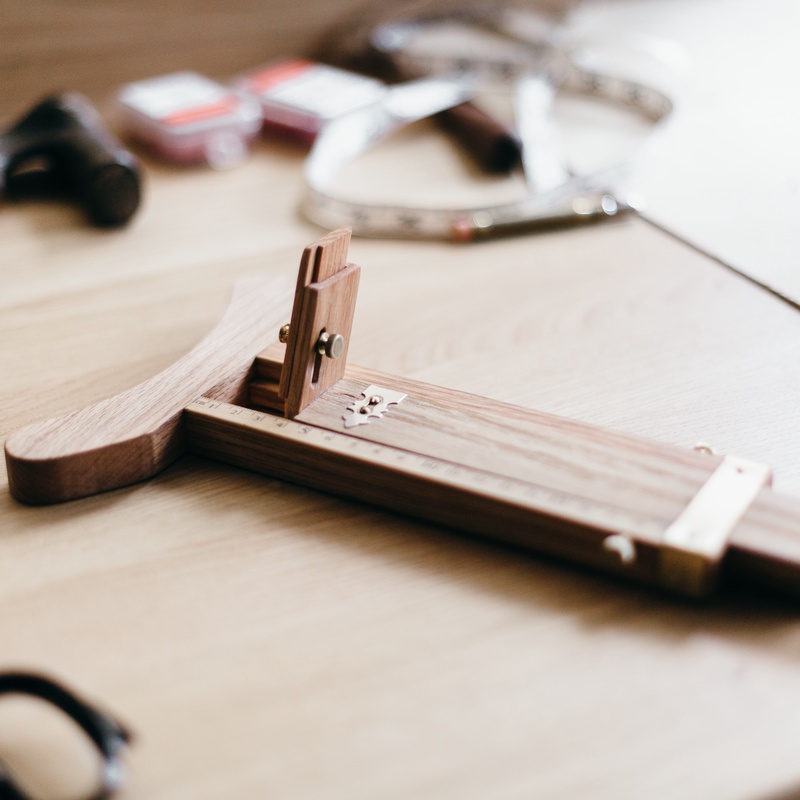 “The hat - in history a part of everyday life that has long since faded away.” This is exactly what the Vienna-based bespoke hatmaker studio is about to change, by taking this old craft to a whole new level. 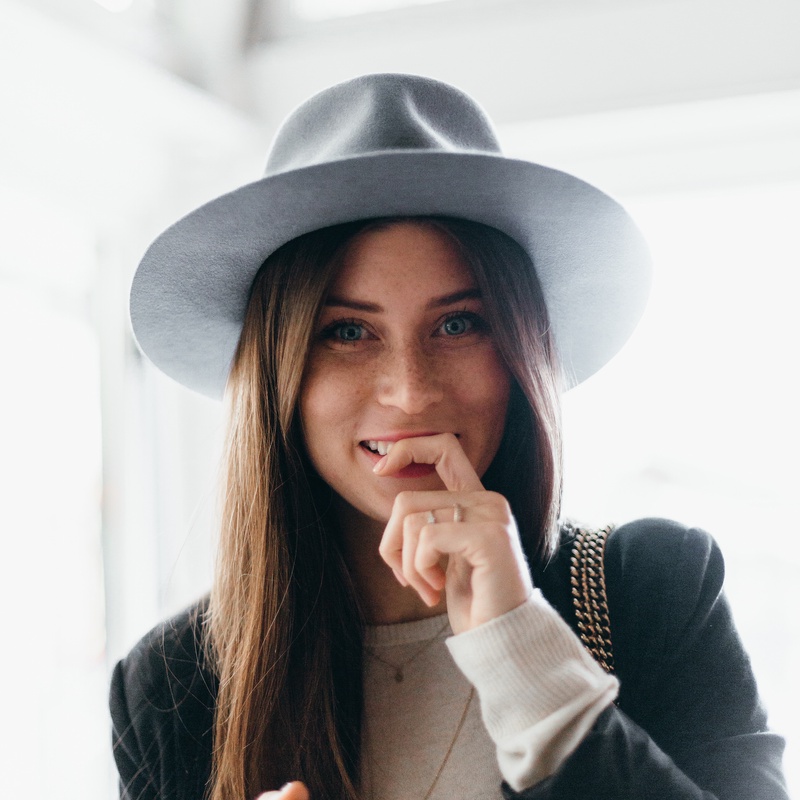 “Eating is always done at a large table with the whole family and many friends” — is the philosophy behind NENI where we caught up with Vicky Heiler for a quick but rather delicious lunch in-between two meetings. We’ve just got to know the whole story about the cool brothers and their mom running this culinary gem of Naschmarkt along with Nomade Moderne, the bespoke hat brand, which is Vicky’s favourite in Vienna. We are happy to introduce you our Vienna ambassador, who already took us to amazing places. She’s full of ideas what else we should see in our very tight 12-hours-stay in Vienna. She’s — just as much of a real local — a real traveler too, who’s been craving such guide as Local’s Lore for a long time.